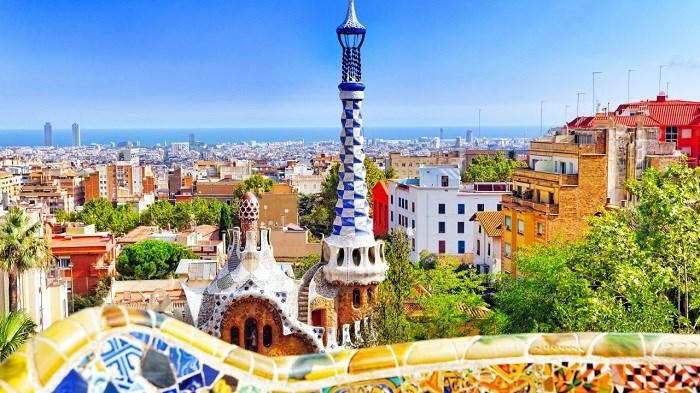 Barcelona All packages are available upon request

The Temple Expiatori de la Sagrada Família is a large unfinished Roman Catholic church in Barcelona. Designed by Catalan architect Antoni Gaudí, his work on the building is part of a UNESCO World Heritage Site. In November 2010, Pope Benedict XVI consecrated the church and proclaimed it a minor basilica.

The Park Güell is a public park system composed of gardens and architectonic elements located on Carmel Hill, in Barcelona, Catalonia, Spain. Carmel Hill belongs to the mountain range of Collserola – the Parc del Carmel is located on the northern face

Casa Batlló is a building in the center of Barcelona. It was designed by Antoni Gaudí, and is considered one of his masterpieces. A remodel of a previously built house, it was redesigned in 1904 by Gaudí and has been refurbished several times after that.

La Rambla is a street in central Barcelona. A tree-lined pedestrian street, it stretches for 1.2 kilometres connecting Plaça de Catalunya in the centre with the Christopher Columbus Monument at Port Vell. La Rambla forms the boundary between the quarters of Barri Gòtic, to the east, and El Raval, to the west

The Cathedral of the Holy Cross and Saint Eulalia, also known as Barcelona Cathedral, is the Gothic cathedral and seat of the Archbishop of Barcelona, Catalonia, Spain. The cathedral was constructed from the thirteenth to fifteenth centuries, with the principal work done in the fourteenth century.

The Magic Fountain of Montjuïc is a fountain located at the head of Avinguda Maria Cristina in the Montjuïc neighborhood of Barcelona, Catalonia, Spain. The fountain is situated below the Palau Nacional on the Montjuïc mountain and near the Plaça d'Espanya and Poble Espanyol de Barcelona.

Locals head to the seaside neighborhood of La Barceloneta to surf and sunbathe on Sant Sebastià Beach, and to dine out at al fresco seafood restaurants and traditional tapas bars. Posh yachts fill glitzy marinas like the Port Olímpic complex, which is connected to the beach by a long, palm-lined promenade. The Port Cable Car offers panoramic city views on its way to Montjuïc hill.

The Palau de la Música Catalana is a concert hall in Barcelona, Catalonia, Spain. Designed in the Catalan modernista style by the architect Lluís Domènech i Montaner, it was built between 1905

The Poble Espanyol is an open-air architectural museum in Barcelona, Catalonia, Spain, approximately 400 metres away from the Fountains of Montjuïc. Built for the 1929 Barcelona International Exposition, the museum consists of 117 full-scale buildings, which recreate Spanish villages.

Aquarium Barcelona is an aquarium located in Port Vell, a harbor in Barcelona, Catalonia, Spain. The 35 aquariums at the facility are home to 11,000 animals representing 450 species. The aquarium contains a total of 5,000,000

Port Vell is a waterfront harbor in Barcelona, Catalonia, Spain, and part of the Port of Barcelona. It was built as part of an urban renewal program prior to the 1992 Barcelona Olympics. Before this, it was a run-down area of empty warehouses, railroad yards, and factories.

Barcelona Zoo is a zoo in the Parc de la Ciutadella in Barcelona, Catalonia, Spain. The zoo used to be internationally known as the home of Snowflake, the only known albino gorilla, who died in 2003.