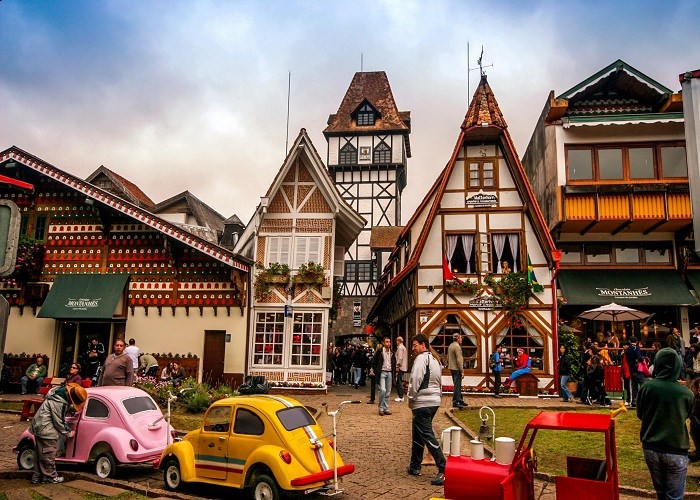 Welcome at São Paulo–Guarulhos International Airport by the staff. Delivery of your vouchers and the documents of your trip. Brief review of the tour during your transfer to the hotel in Paulista Check-in

The whole day is devoted to the city-sightseeing of Paulista Avenue & Visit São Paulo Aquarium (Avenida Paulista in Portuguese, Paulista being the gentilic for those born in São Paulo state) is one of the most important avenues in São Paulo, Brazil. It stretches 2.8 kilometer’s (1.7 mi) and runs northwest to southeast.

One of São Paul's biggest and longest avenues, this is where everything happens. Movie theaters, schools, cultural centers, shopping malls, parks and remaining’s of late 19th century.

Morning Breakfast Then Departure To Campos do jordao

The whole day is devoted to the city-sightseeing of Campos do Jordão Teleférico is a municipality in Brazil’s Mantiqueira Mountains and part of the state of São Paulo. It encompasses a city of the same name, where Swiss-style architecture is common, and the Parque Estadual de Campos do Jordão to the northeast. Sprawling over a third of the municipality, the park’s pine forests and mountains are home to a variety of birds and endangered animals, including pumas and ocelots.

The whole day is devoted to the city-sightseeing of Aparecida is a city in southeast Brazil. It's known for the huge neo-Romanesque Basilica of the National Shrine of Our Lady of Aparecida. The church holds a statue of Brazil’s patron saint, originally housed in the 18th-century Basílica Velha (Old Basilica). Pilgrims walk the Passarela da Fé pathway connecting the sites. Porto Itaguaçu marks the spot near the Paraíba do Sul River where the statue was reputedly found.

Morning Breakfast Then Departure To Guaruja

Free Day in Guarujá is a Brazilian coastal town near São Paulo known for its many beaches. Long, sandy Enseada Beach is home to the Acqua Mundo aquarium, with sharks and penguins. Southwest along the coast, Tombo Beach has strong surf. In the hills above the shoreline are the WWII tunnels of Andradas Fort. The Barra Grande Fortress, near the mouth of the Santos Estuary, was built in the 16th century to defend against pirates.

Morning Breakfast Then Departure To Paulista

Transfer to the São Paulo–Guarulhos International Airport by the staff assistance with departure formalities.

Price per person in double room

Transportation with an adequate deluxe vehicle according to the number of participants.

Original and copy of the passport (Passport should be valid for at least six (6) months from the date of visa issuance.)- 2 photos 3x4 (white background).- Salary certificate and authorized signature of his which registered in Chamber of Commerce- Original Bank statement for the last six (6) months with present balance